You will probably hear the word “INFLATION” in the financial news – but what does it really mean?  And should you care about it?  The answer is definitely YES!  Inflation is the reason why a product or service you buy today has cost you more than it did a year ago.  And why it will cost you even more next year – and the year after! 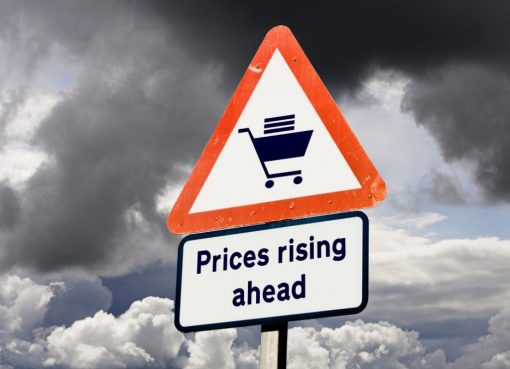 Money consumes a good deal of most people’s days. People spend most of their day trying to earn it, just to spend their limited leisure time trying not to spend all of it. As a society, we look down on those without it and judge those with it. We use it to keep score and to define success and failure. We have even created a term, affluenza, to describe the debilitating effect it can have on people. Interestingly enough, with all the worry it induces and influence it yields, we don’t spend a lot of time thinking about what it is. Any discussion about investing must start with a discussion about money. Without understanding two key principals about money, it is difficult to make good long-term decisions about investing.

In Australia, and around the world, our money is something called a fiat currency. A fiat currency is a currency that derives its value from the fact that the government says it has value. This is a relatively new concept. Before US President Nixon eliminated the link of the US Dollar to the gold standard in 1971 the value of money was underpinned by gold. That means that before 1971 you could literally exchange the US Dollar for gold from the government held reserves. Nixon’s action also made the Australian Dollar a fiat currency since at the time the Australian Dollar maintained a fixed exchange rate to the US Dollar. Since 1971, instead of being able to exchange your money for something like gold you are able to exchange money only for goods and services. This right to exchange money for goods and services is guaranteed and enforced by the government. The key takeaway is that money itself has no value; the only value is the goods and services that we can exchange it for.

Since money has no value other than the ability to exchange it for goods and services it is important to look at the costs of goods and services. With few exceptions, the cost of goods and services go up over time. This concept is known as inflation. In fact, the inflation rate in Australia has gone up an average of 5.07 percent per year between 1951 and 2017. To put that in real terms, if you paid $3.50 for a cup of coffee in 1951, like many people do today, it would cost $91.55 in 2017 if it increased at the rate of inflation. If the goods and services that money can be exchanged for continue to go up in price, the value of money continues to go down. Simply put, money is a depreciating asset.

The fact that money is a depreciating asset means that keeping all your savings in cash may be a bad idea for many long term investors. Once you get around to spending it, you will be able to buy less than the day you earned the cash. You are probably thinking that this doesn’t apply to you because you put your money in a savings account or term deposit. In addition to keeping your money safe the bank is paying you interest so you don’t need to worry about your money losing value. Unfortunately, this may not be the case. In January 2017, the Reserve Bank released data showing the average interest rate paid by online savings accounts was 0.45 percent. At the same time the Reserve Bank announced that the annual inflation rate was 1.30 percent. While you may be doing better than the person who keeps their savings in cash, it is still projected by the RBA to lose purchasing power each day it sits in the bank. Between 1996 and 2016 the interest paid on cash was 2.60 percent a year while the average inflation rate was 2.50 percent a year. The real return of 0.10 percent per year means that if you put $10,000 into the bank between 1996 and 2016 your real purchasing power would have increased by a grand total of $10. For more information, see the RBA statistics.

There are certainly reasons to keep money in the bank. Savings to cover emergencies and for large planned purchases in the near future makes sense. Keeping some cash in an investment account to take advantage of opportunities that may present themselves as markets fluctuate makes sense. However, it is important to remember that the perceived safety from leaving your long-term savings in the bank is fraught with the risk that your purchasing power will slowly be eroded. Always remember that the only value that money holds is the ability to exchange it for good services and that the value of money is slowing depreciating.

The following chart shows two additional places you can put your money that have historically offered better inflation protection.

The impact of inflation on investment returns 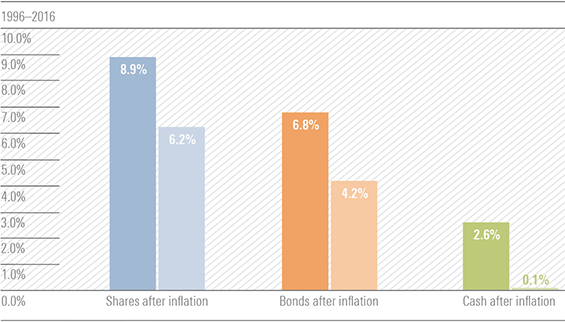