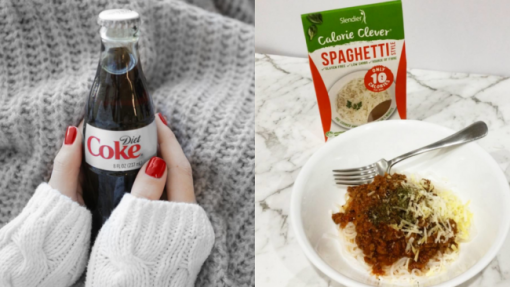 We’ve all had that moment of weakness at the supermarket, staring into the confectionary aisle, longing for a hit of good ol’ sugar.

Knowing it’s not the best thing for your body, you reach for the diet soft drink instead of the chocolate bar – there’s no sugar or calories, it must be a better choice, right?

Unfortunately not, according to a new study out of Yale University, which found that diet foods and drinks can actually trigger weight gain and diabetes. Yikes.

How, you ask? Researchers scanned the brains of 15 test subjects while they consumed ‘diet’ items and found that the body misreads the number of calories in diet foods.

Here’s the thing. Sweet foods signal to your body that you’re about to receive an intake of energy, but when you don’t it becomes confused, and then decides that there are fewer calories to burn.

Researchers found it’s this ‘mismatch’ between food sweetness and calories, that causes your body to stop burning energy, AKA, it reduces your metabolism.

On a side note: they also discovered that the usual ‘reward systems’ in your brain that trigger when you eat something you crave (hello donut), did not trigger when given diet foods and drinks. In other words, if you’re consuming ‘diet’ treats you’ll need more of them to feel satisfied. *Puts Diet Coke down.

Despite the findings, some dietitians still believe calorie-controlled or diet items are a better choice than sugar-sweetened foods and drinks. Better again, of course, is sticking to water, and getting your sugar hit through the natural stuff – like fruit.

Tam Fry, head spokesperson for the National Obesity Forum told The Telegraph, “This research should be enough to convince you that artificial ingredients, whether they be in food or drink, can screw up your system even though they may sound healthy.”